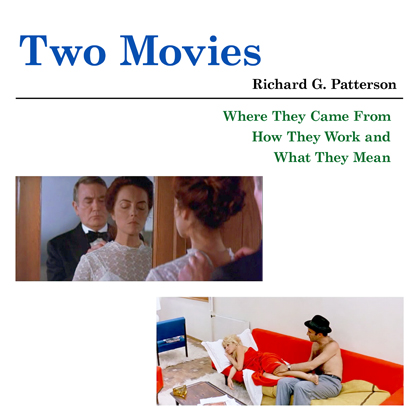 Where They Came From, How The Work and What They Mean

An exploration of the art of cinema by means of a detailed analysis of Godard’s Contempt and Figgis’s The Browning Version as well as Moravia’s novel, Rattigan’s play and Asquith’s earlier adaptation of the play.
Two Movies adapted from literary works with roots going back to ancient Greece.
Two Movies about a marriage coming apart at the seams.
Two Movies about the conflict between idealism and reality.
Two Movies with completely different styles - one a remake of a classic of English cinema, the other a classic of the French New Wave.
Two Movies - one about teaching, the other about filmmaking,
both about the death of a tradition.
Two Movies - one based on a play by a phenomenally successful English playwright, the other based on a novel by one of the greatest  Italian writers of the 20th century.
FILM CRITICISM
TRADE PAPERBACK
8.5 X 8.5 inches
ISBN 9781720572367
328 PAGES
Richard G. Patterson studied philosophy at Yale and literature at Cambridge. He was a Fellow at the American Film Institute Center for Advanced Film Studies and has worked in the film industry as a writer, producer, director and editor. He received an Academy Scientific and Engineering Award for his work on software for digital image compositing and is a member of the Academy He was also editor of American Cinematographer magazine and has written extensively on film and video production.
Available from
Amazon.com
Barnes & Noble
or
Purchase here
also available in
Kindle or Ebook
and at the
iTunes Store