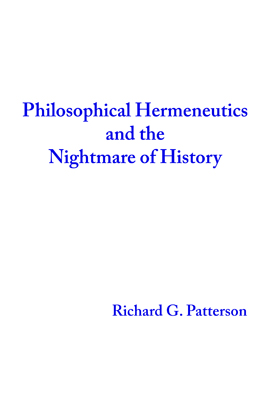 Available from
Amazon.com
Also available as an
Ebook

Philosophical Hermeneutics and the Nightmare of History

Philosophical hermeneutics was an attempt to salvage philosophy in the 20th Century by incorporating the way in which thought andlanguage are historical phenomena and abandoning the goal of absolute certainty in the pursuit of eternal truth. This book si an exploration of its origins and implications in the thought of Martin Heidegger, Han Georg Gadamer, Wilhelm Dilthey, Edmund Husserl, Paul Ricoeur and Owen Barfield.

There are also complementary essays on Norman O. Brown and Richard Rorty.
PHILOSOPHY
TRADE PAPERBACK
6 X 9 inches
ISBN 9781720667575
236 PAGES
Richard G. Patterson studied philosophy at Yale and literature at Cambridge
before embarking on a career in and around the film business.
Available from
Amazon.com
Barnes & Noble
or
Purchase here
also available in
Kindle or Ebook
and at the
iTunes Store